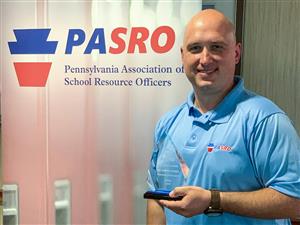 Aaron Skrbin is the man with the plan. In his role as the AIU’s director of safety and security, Skrbin keeps tabs on all that is happening, locally, across the state and throughout the nation as he collaborates with educators and public health experts to develop strategies that keep our students, families and staff members safe.

But Skrbin was not ready for what happened at the Pennsylvania Association of School Resource Officers (PASRO) conference that took place July 28 at the Penn Stater Hotel in State College. Skrbin’s colleagues were able to surprise him with the 2020 PASRO President’s Award for his impressive body of work and tireless effort championing school safety.

“I had absolutely no idea,” Mr. Skrbin said with a chuckle.

Mr. Skrbin helped plan the PASRO conference and was a presenter. He even worked alongside his colleagues to establish a safety plan for the conference which included temperature checks, masking and social distancing.

“We did everything by the book and were well within the guidelines that the Governor established,” explained Mr. Skrbin.

Despite his involvement in the planning of the conference, Mr. Skrbin’s award was kept a secret until the moment it was announced. Collecting awards is not at the top of Mr. Skrbin’s priorities, however the recognition from his peers was touching.

“It really does mean a great deal to me,” Mr. Skrbin said. “School safety has been an interest and passion of mine for a long time. We do this for the safety of the kids, to create environments for them to learn in a safe and comfortable way. To my core, I believe in promoting the positive impact of school resource officers.”

A former firefighter and emergency management specialist, Skrbin came to the AIU from South Fayette School District, where he served as the district’s high school principal and director of school safety. During this time, Skrbin was instrumental in starting the district’s school resource officer program and promoted the SRO’s role in school safety.

Skrbin’s work at the AIU has had a profoundly positive impact on our schools, especially during the COVID-19 pandemic. Congratulations on the much-deserved award and recognition!