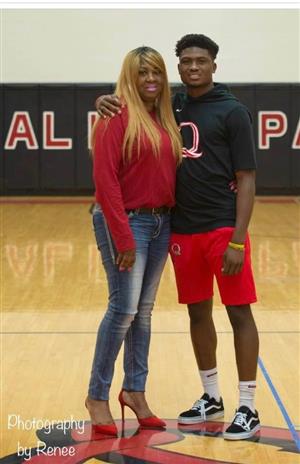 Nearly three decades ago, Theresa Devonshire was in the process of signing up her son, Keir, for the AIU’s Head Start program. While that meeting was to put her son on the right path for school, it also set Mrs. Devonshire on a journey of her own.

Gladys Lee, an AIU family advocate attending the meeting, noticed Mrs. Devonshire’s positive energy. She thought that Mrs. Devonshire would be a perfect fit for the program and suggested that she apply for an available job opening.

Now, 26 years later, Mrs. Devonshire is still on the job helping families and children, and continues to expand her reach through several non-profits from Pennsylvania to Kentucky.  A natural leader, she was recently appointed to the Pittsburgh Women’s Leadership organization and to Mothers of Black Sons.

Mrs. Devonshire is a Head Start family advocate at centers located in Cornell, Sto-Rox and Montour. In that role, she sets up families with a variety of services, such as childcare, food, employment and education. Her first encounter with Head Start so many years ago sticks with her and has shaped her philosophy when working with families.

“I’m a helper and she could feel that energy,” recalls Mrs. Devonshire. “I tell parents that I recruit: This program helped me get to where I am. I tell the story often and it still brings tears to my eyes.”

Mrs. Devonshire is a single mother who survived a bout with breast cancer. No matter what, she always remains focused on the families she serves.

“When I think of Terrie, I think of a strong woman who has devoted her career to helping others achieve their goals in life,” said AIU Head Start assistant director for family services, data and outcomes Jeanette Casciato. “Terrie has had to overcome her own share of adversaries, but this has never stopped her from helping the Head Start families. She is always available to all of her families as a listening ear, or a shoulder to cry on or to celebrate successes.”

Mrs. Devonshire is involved in numerous non-profits, including  Aliquippa-based Arising Families, Inc., an organization that supported 12 families this past winter with coats, gloves, hats, scarves and Christmas presents. This year, she hopes to nearly double the amount of families served to 22.

In addition, Mrs. Devonshire is a member of Pittsburgh Women’s Leadership and the Kentucky chapter of Mothers of Black Sons. Her youngest son, M.J. is a football player at the University of Kentucky. He was one of the most sought-after high school players in Pennsylvania his senior year at Aliquippa before signing with the Wildcats. Keir also played football for Edinboro before he was accepted into a master’s program at Duquesne University.

Mrs. Devonshire said her involvement in numerous organizations helps her stay connected to important networks as both a professional and as a mother. With M.J. in Kentucky, having a support system of fellow parents is crucial. She also likes to stay connected to leaders in local organizations and, of course, continue to be a helper wherever she can. Even now, many years after her career began, Mrs. Devonshire continues to learn and grow.

“I’m finding my niche,” said Mrs. Devonshire. “At the end of the day, when you look at your birthdate and your death date, you have the dots in between. Those dots are what you made of your life and they mean a lot.”