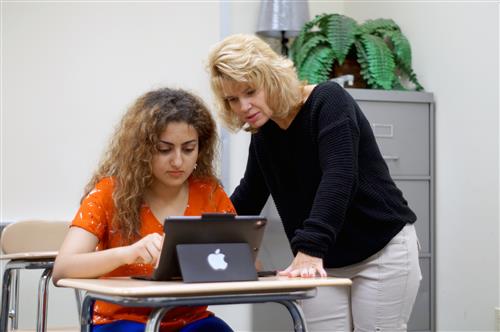 West Mifflin student Zainab Alhelali will graduate a year early while taking college courses at Point Park University. In her college entrance essay, Zainab detailed her experience moving from Iraq to the United States at the age of 10, and how challenging the transition was.

What she did not mention was one of her defining characteristics: Zainab is legally blind.

It was by design. Zainab is confident and unflinching in the face of adversity. She would rather work twice as hard just to keep up than use her visual impairment as an excuse not to succeed.

"I don't want to be that person who says, 'I can't do this because of my vision,'" Zainab said. "Because they’ll say it's OK. I want to be the one to do it."

Zainab was born with a condition known as Achromatopsia. It is a non-progressive, hereditary visual impairment that results in color blindness, light sensitivity and a loss of vision. For example, in order to read a document on a computer screen, Zainab must decrease the brightness until the screen is a grayish-black. She also needs to enlarge the font to about 18.

Growing up in Iraq, it was difficult to get the support she needed.

"It was hard," said Zainab, who along with her family speaks Arabic at home.

She greatly benefitted from the support provided by the West Mifflin School District, along with the AIU Blind and Visually Impaired Support Program. It was at this time that she was exposed to advanced technology. In the eighth grade she began working with her current AIU Vision Teacher, Sharon Secrist. Zainab said she learned more about her visual impairment and how to build her life around the Achromatopsia without letting it impede her progress.

For her part, Sharon has worked with Zainab on vision goals and orientation and mobility, which is traveling indoors, out in the community and at Point Park University. 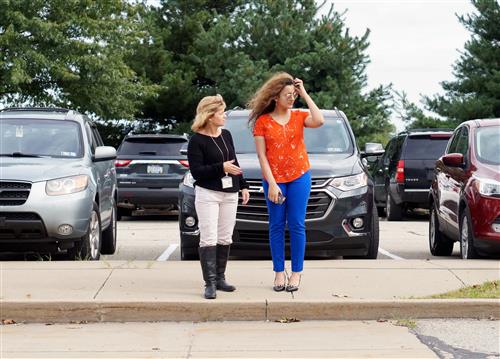 Zainab prefers not to use a cane, but, due to the brightness, she does wear a pair of stylish mirrored sunglasses when she's out and about.

Ms. Secrist’s role is to work with Zainab on the best way to access her academic curriculum. Technology helps. Sometimes, Zainab uses an app to read notes and assignments to her. Her phone allows her to zoom in on the blackboard or lesson notes by taking pictures.

"Before I was embarrassed when other students were around and I had to take a picture," Zainab said. "Now, I don't care. The other kids say it's so cool and now they do it, too, because they don't want to have a lot of papers."

Taking the time to talk with Zainab and understand where she came from allowed Ms. Secrist and Zainab to move forward together. It's easy to see the bond they share simply by speaking to them. An easy smile perks up on Ms. Secrist's face when she talks about Zainab or shows off pictures of her. Zainab lights up and talks about the many ways that Ms. Secrist has guided her on her journey.

"I had to understand who she was in order to teach her," Ms. Secrist said. 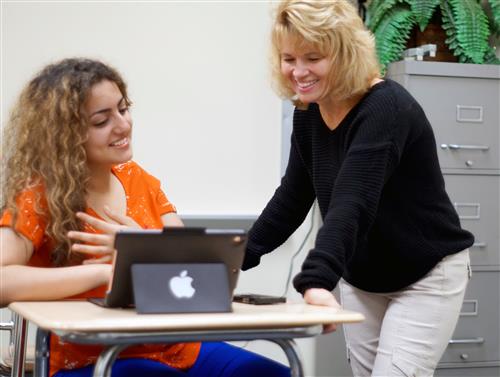 Education is important in Zainab’s household. Her father is a surgeon and her mother is a mathematician. Her father was a general in the Iraqi military and the family moved several times before making the trek to America.

Zainab is on the fast track to return to Iraq for medical school. She is a citizen of both the United States and Iraq. The latter allows her to study at Baghdad University for free where she will study psychiatry. After six years of school there, she plans to return to America for her residency and to practice.

Zainab is taking college courses, graduating high school early, is a strong advocate for herself and is on the fast-track to success. Those traits, not her visual imparment, have become her defining characteristics.

“You have no idea how proud I am of her,” said Ms. Secrist. “I've never had somebody so driven.” 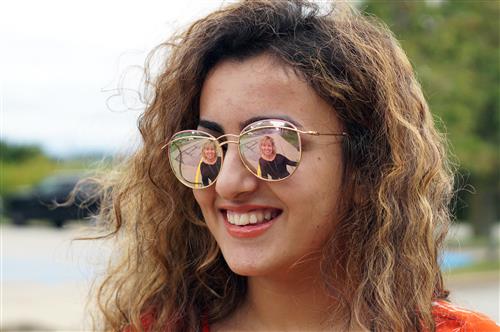